The monster that comes at night....

It comes at night, after dinner or after a shower, when I play with mommy. It just hoovers over my face and wants to grab my nose. It's the hand monster!!!

It scares me sometimes..... 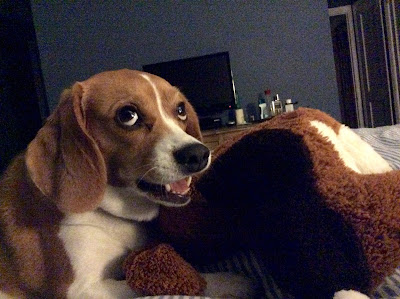 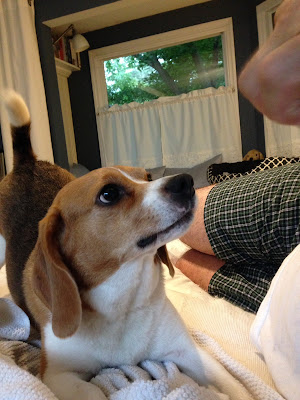 
And after victoriously defeating the monster and mommy rewarding me with my good-night-treats, I dream of attacking an even bigger monster next time. 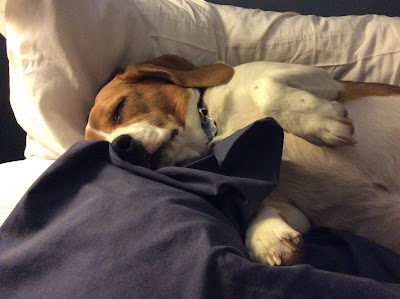 You know that moment, when you find that perfect stinky dead worm or that awesome smelly spot on the lawn that just screams "Roll all over me"! I found it just yesterday! I looked at mom, saw that she did not look too happy about my findings, but I thought "What the heck!"
And so I rolled.... 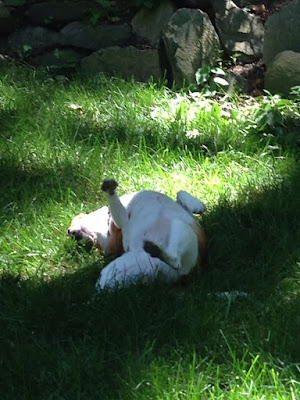 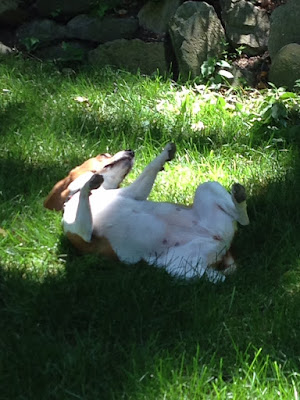 ...until I smelled like a stinky little bug and had that wonderful, exciting, adventure whiff all over me and my collar.

Mom was not pleased and the words she used weren't those of a lady, I am telling you. And the one word that scared me the most was "shower". It always amazes me how my sweet and loving mommy can turn into Momzilla in no time. She grabs my towels from the cabinet in the basement, locks me in the bathroom, turns on the water and has no mercy with my stink.

Here you can see my best suffering face to show her how much I disrespect her decision to turn me into a well-deodorized puppy again.

But as usual, I had the last laugh and rubbed my damp, clean self all over mommy's fine white comforter! Just click on the video below! 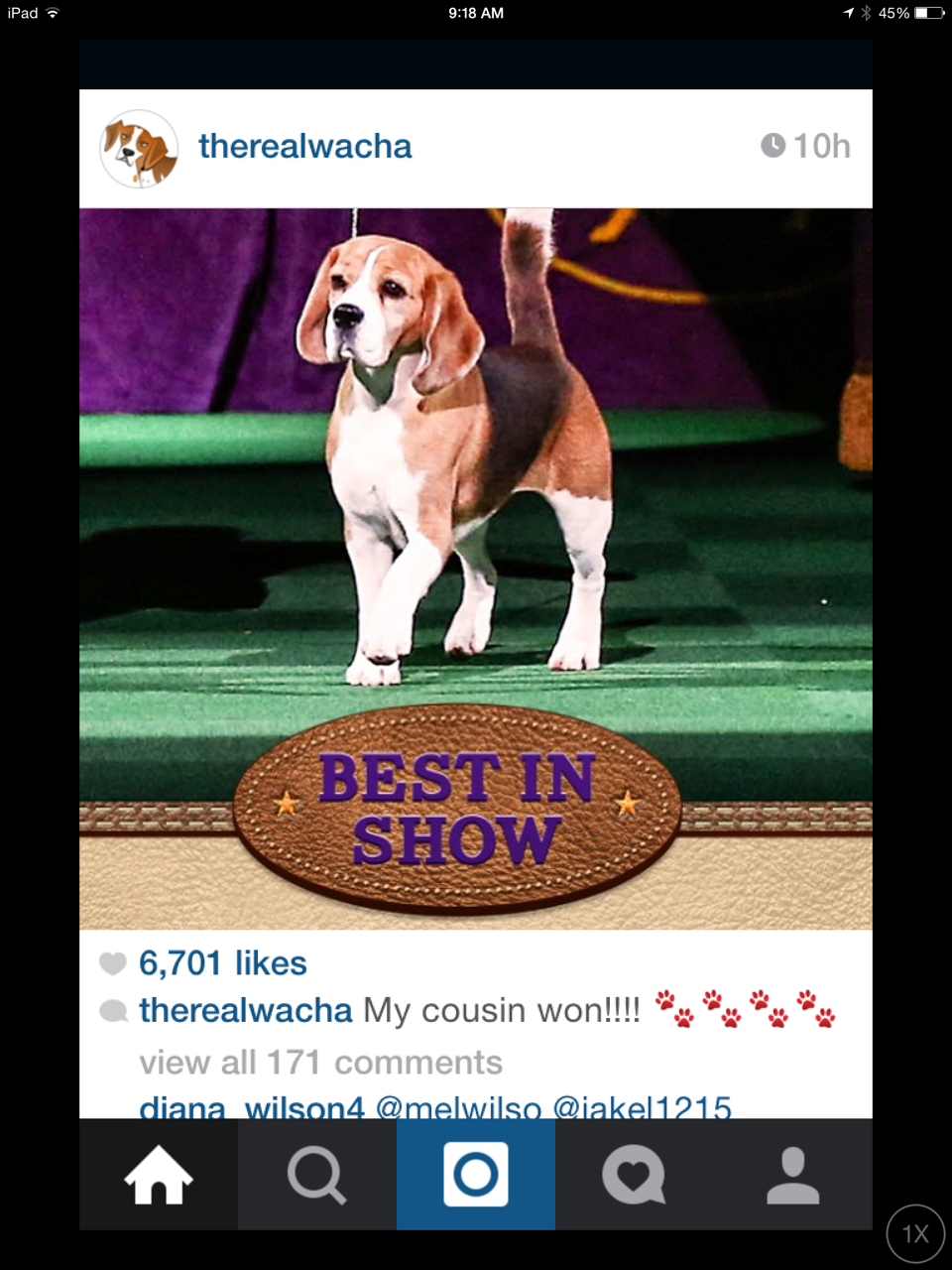 By now you should have all heard that one of my peeps, Miss P, won the Westminster Dog Show. No surprise, if you ask me! Us beagles, we are just fabulous, magnificent, adorable and lovable. No question about it. Did I say smart, cute and amazing?

You think I am throwing an attitude? Not at all. I just ask for the treatment that is worthy of a winner: Crown on head, filet mignon for dinner, rose paddles on the floors and poopy bags scented with Chanel No. 5. 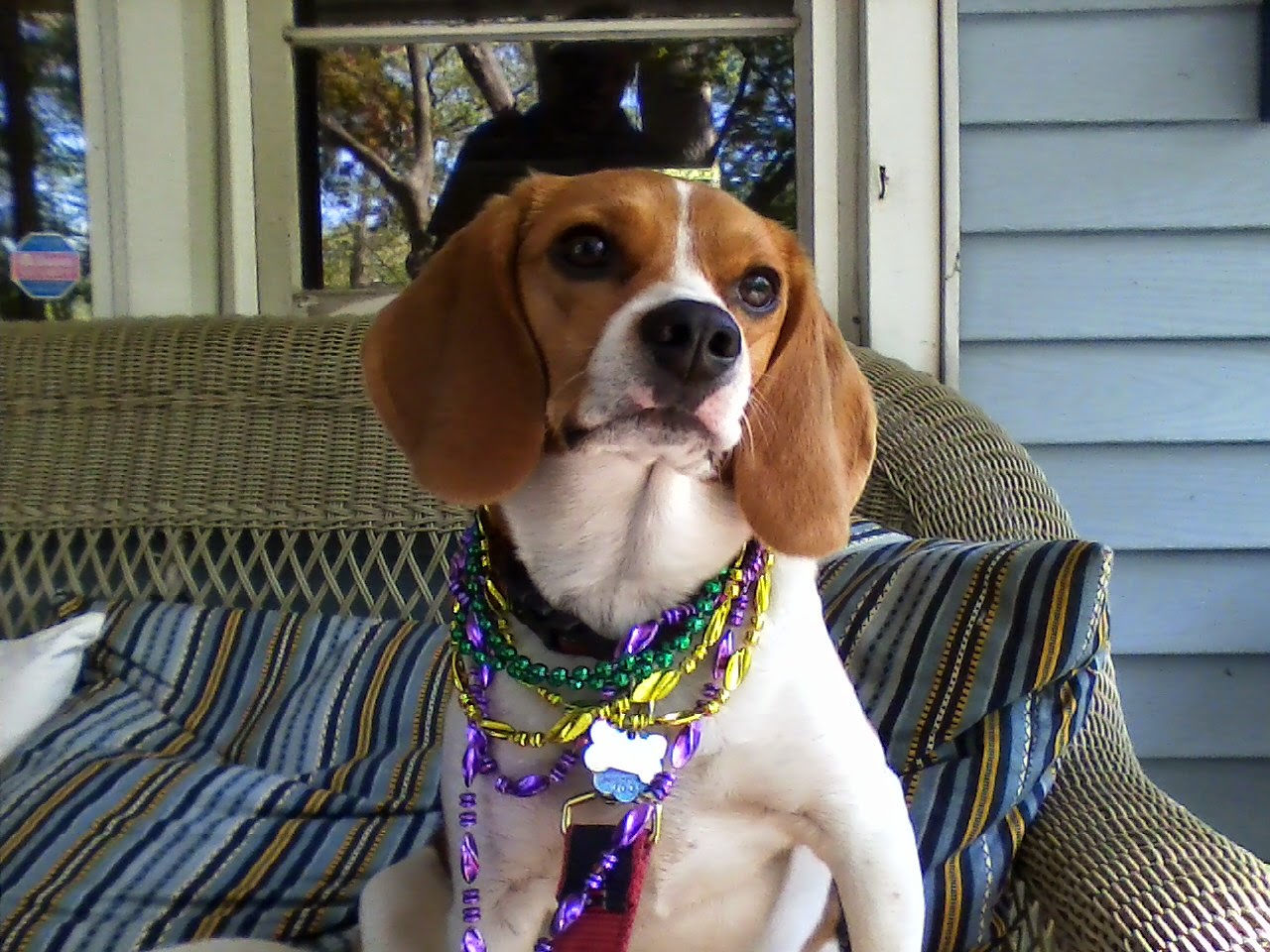 I mean, does any of you question that I couldn't have won this show if mommy and daddy would have taken the day off to take me there?

Well, at least I have won "Best in House", 'Best on Street" and "Best on Block" several times in the past and most days service around here is worthy a winner.

If you wish to arrange for an interview, please speak to my assistant as my schedule seems to get busy between feedings and naps. 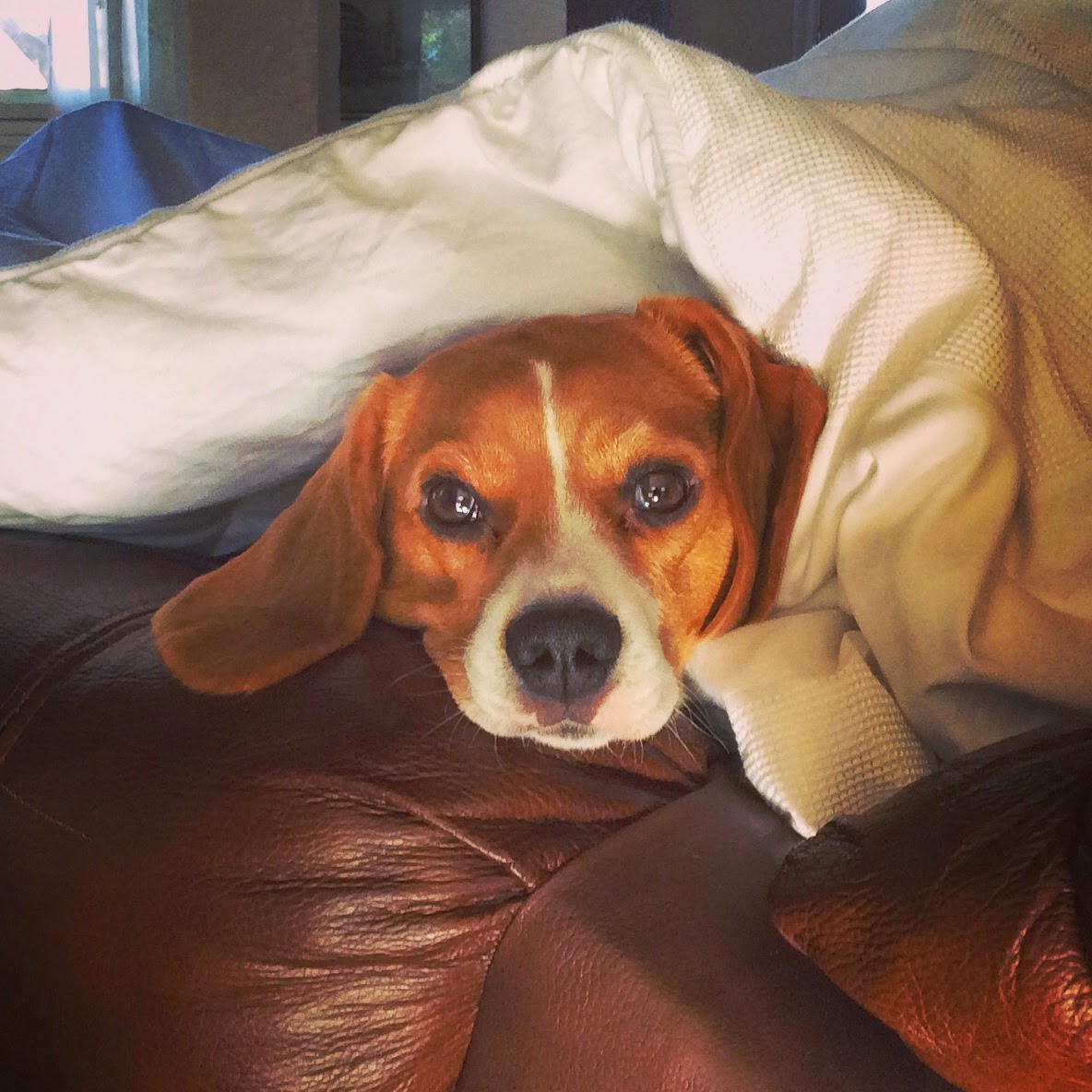 Congratulations Miss P - from one sexy hound to another!

Posted by Ellie Koch at 9:39 AM No comments:

Sending you lots of love and kisses.

Posted using BlogPress from my iPad


Mommy was home today because of icy and snowy roads and who has to suffer? Me. What's so darn funny about putting a green octopus on my head? It's not that it is flattering or makes me look any thinner. I am just being used as an object that one can make fun of. Shame on you, mom. And you're welcome everybody who is now laughing at me for looking silly. Glad I could make your day!

- Posted using BlogPress from my iPad
Posted by Ellie Koch at 11:56 AM 1 comment:

Where I have been and what I have done:

Some of you might have been wondering, why I have not posted anything for a while. Well, globetrotting beagles like me once in a while have to go on road trips with the rest of the pack (mom and dad, of course) to broaden their horizon.

So a few weeks ago, mommy stuffed pretty much the entire house and a whole supermarket into her car, packed some coolers with food for me and daddy (hard boiled eggs, my friends!) and off we went to visit grandma in California.

Then from Indiana, to Illinois to Nebraska. We stayed at a really nice hotel there in Lincoln, they even allowed dogs on the bed there - I think.....

We also saw this hound howling at the sun in the middle of the day....

After driving through Nebraska FOREVER we ended up in Wyoming. But, man, I gotta tell you, they have spooky stuff in there hotels.
I saw this dude in Evanston in the lobby of the Best Western and even though I barked at him like crazy, he would not go away. Instead, mommy pulled me out of the lobby - she was probably afraid that I would scare the hell out of the bear!

Thank came, you guessed it, more nothing....

...and then we ended up at this strange lake that was made all out of salt. Mommy yelled at daddy for letting me walk on it and I had to have my paws cleaned with water afterwards. They called it the Salt Flats and daddy got all excited and wanted to drive the car over it!

After Utah came Nevada and if I thought before that there was a whole lot of nothing out there. Nevada had even more nothing - and rattlesnakes on top of it!
Mommy said I had to hold my pee until there were no more snakes and I totally got it.


After four days in the car, three hotels, lots of treats, pee stops in every state along the way, we made it to the Pacific Coast.
And I will tell you all about it in my next blog.
So stay tuned and wait, there are more adventures to come. Like the one time when I almost......
OK, gotta go. It's my birthday today. See you next week.
Love, Ellie 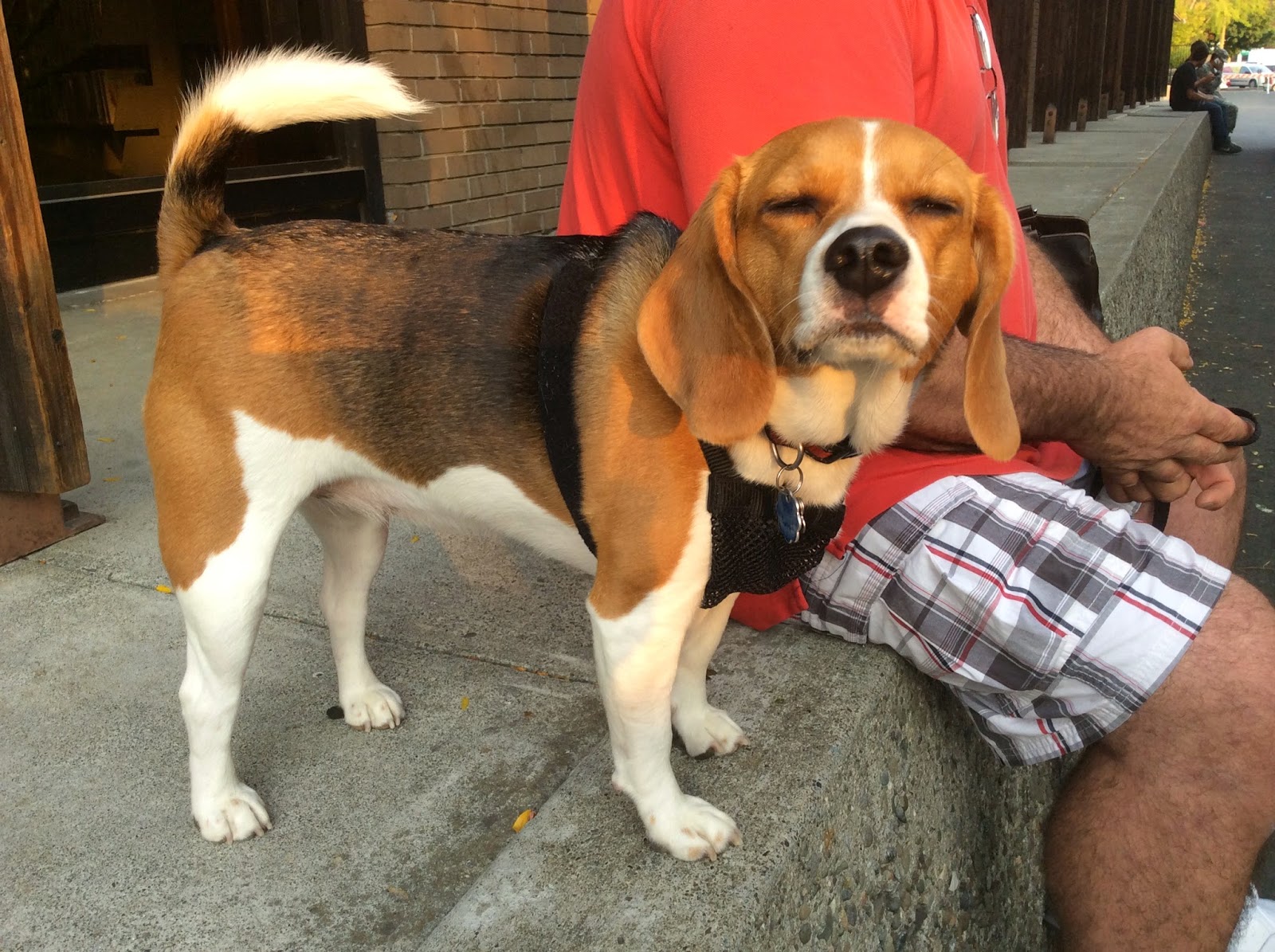 ...well, usually I would be dreaming of finally playing with a cat or having bacon for breakfast every morning, but apparently, it is still Soccer World Cup and mommy´s team is still in, so I was told that all I am allowed to dream of is the German Team winning. To help me achieve my goal, mommy propped me in the German flag this morning. I tried very hard, to just think of the German Team, but all that came to mind was German Bratwurst and Gulasch and Sauerbraten. Sorry, mom. I still hope that the German Team wins tonight, cause when mommy is happy, the treat rate goes up significantly here. Mommy even promised me a car ride with the German flag hanging out the window.
So, go Germany! For the sake of happy beagles and lots of treats, bring the World Cup home to Germany!
Posted by Ellie Koch at 5:43 AM No comments:

Ellie Koch
So here I am: I love sneakers, socks and my monkey Marcel, Blue Buffalo treats and my vitamin paste. I adore the big human and his wife that I live with and have been getting yelled at for eating the Christmas tree. Find out more about me here.